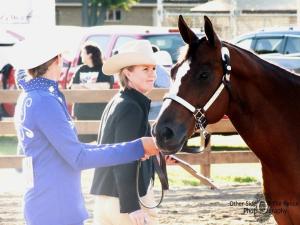 There are all sorts of opinions these days regarding horse (and livestock) judges, and whether or not they should be using social media, and/or how. This always strikes me as funny when I hear it…because social media is such an integral part of both my personal and professional life these days, it’s like someone just told me I shouldn’t communicate with a pen or a phone.

I realize that often when someone suggests judges shouldn’t be on social media, they are concerned about ethical issues. A great blog post titled “Is Facebook a Judge’s Worst Enemy?” by Rachel Cutrer sums this up perfectly from a livestock perspective, but it really isn’t much different in the horse world. (Although if someone tags me in a photo of a horse I’ll soon be judging, or friends me right before that particular show we will likely no longer be Facebook friends, I’ll tell you that right now.)

Sometimes I do wonder if people question or take issue with the fact that I’m “friends” with people I inevitably do judge. But to be honest, I know quite a few horse people, and I know most of them outside of Facebook. I’d know them even if I wasn’t on Facebook, and there are few judges who can’t say the same. As far as the rest, if I see them on Facebook, it is typically on my phone, in a teeny tiny square, at best. If people only knew how much I don’t recognize them in the show ring, they might not bother friending me, and subsequently having to endure my incessant cat/corgi photos.

Other people take issue with judges trying to get judging jobs via social media. Typically, judges who excessively self-promote are not well received by other judges, that’s a fact. The “unwritten rule” is that your work will speak for itself, and people will hire you based on that work. I totally agree.

If you are a particularly negative person, or feel compelled to whine (via social media or otherwise) about the lack of potty breaks, high quality food, or professional ring stewards, you probably should stay off social media with that as well. But come on. You’re not Beyoncé, for heaven’s sake. Have a hot dog (or a snow cone) and relax. And maybe even consider thanking whomever it is that helped you survive the day. Besides, if they aren’t bringing you water, you probably don’t need a potty break. You may also pass out, so show managers…please provide water.

As you’ve probably guessed, I actually think that judges on social media can be a very good thing…and here is why: one of the biggest threats to the horse show industry is that people often don’t understand how classes are judged, or why they placed as they did. Sometimes, they even quit, or at least change disciplines because of it. And that is a problem.

From introductory levels to world champions, most people want to know why they placed where they did, and sometimes even what they can do to improve. They are spending a lot of money (relatively speaking) to participate, and in the traditional rail classes etc., they rarely get access to judges. Social media (done well) can provide at least some of that information, and even a level of interaction that has sadly been lost for a variety of reasons.   Horse judges rarely get the opportunity to explain themselves anymore (as livestock judges always do) unless they judge county fairs or 4-H events, but even then, so many classes have been added, and everyone is in such a rush to finish, that it is often hard to do. At larger shows, time is a factor, as is the perception (and in some cases rules) in place that prohibit access to judges. Period. I understand the reasons for this, but at the same time, I think it has had a negative impact on our industry.

I’m not saying that I want everyone at the horse show to PM me on Monday morning asking questions, per say (although I have answered a few that way). What I am saying is that social media savvy judges can explain what they are doing and why, the other 6 days of the week, on their own pages. Or on any of the zillion groups that exist for that very purpose, but that are often chock FULL of misinformation. Plus, you get the added bonus of thinking about what you say before you say it, if that is actually a service you offer.

Many exhibitors truly do NOT understand how or why we place classes. This is part of the reason for the increased popularity of Reining, Dressage, Trail, Western Riding etc. Sharing other score sheets will also help somewhat, but it will need to be a score-sheet an exhibitor can actually understand without an interpreter. Yes, there is also a level of responsibility on the part of the exhibitor to understand the rules and what is required of them, I get that.

Making a contribution on social media is certainly not for the faint of heart. I’d also suggest you avoid seeking out commentary about a given show you judged, because invariably there will be someone who didn’t like your decision(s). If you can’t stand the heat, as the saying goes, then STAY OUT OF THE KITCHEN. But you can actually learn about what exhibitors truly think about our industry (and sometimes non-exhibitors as well). Is it sometimes a headache, sure.  Is it enjoyable when someone blows up your page with a question about western pleasure that turns into a firestorm, when all you wanted to do was enjoy your Friday?  Not. At. All. Making a contribution on social media requires a thick skin, and the ability to maintain your composure when it feels like you are under attack for your view-point or perspective…just like judging a horse show.

← The Power of -Er…It Ultimately Comes Down To Comparisons
God is Great, Beer is Good, and This Western Pleasure Thing Has Gotten Crazy →