Adulting is a Pain

Well, as previously mentioned, I’ve got enough material to fuel a few posts now. I know some of my friends are probably thinking ”LET IT GO, ALREADY.  JUST STOP TALKING.  OR WRITING.” Sorry folks. It’s a process. If it makes you feel any better though, I’m nearly all the way through said process.   A couple of days of total confusion as to how what I perceived to be a neutral post (as did many others) could spiral so wildly out of control, a few days of anger (Uneducated and classless, SERIOUSLY?!), and now, like any actually EDUCATED person, trying to analyze what, if anything, really  DID go wrong. Although I feel compelled to say, that the only people who would call a total stranger uneducated and classless tend to be, well, uneducated and classless.   (For those just joining us who feel like you’ve stumbled onto the rant of a crazy person, please review the last two posts. https://outoftheboxstall.wordpress.com/2015/10/19/god-is-great-beer-is-good-and-this-western-pleasure-thing-has-gotten-crazy/ & https://outoftheboxstall.wordpress.com/2015/10/26/unless-you-know-me-you-dont-actually-know-me-or-anyone-else/ That will bring you up to speed.)

Anyway, I don’t feel as though I can legitimately suggest that (to quote myself):

“…rather than post videos and inflammatory comments on social media, everyone needs to take a step back, talk face to face, consider the genetics, training techniques, and daily life of western pleasure horses, the perspective and point of view of both sides, and then make their own decisions about what to do.   But then, that’s not always popular in this day and age. There isn’t always a “like” button (or a bronze trophy) for taking personal responsibility.”

Unless I do it too. (Sigh. Adulting is a pain).

So why did I totally offend so many in the dressage community with that initial post? It appears that this is probably the offending comment, but why?

“Let’s stop and think about Grand Prix dressage for just a minute. Horses don’t naturally trot and canter in place either, yet that seems to be perfectly acceptable and highly revered in the Dressage world. I think it has something to do with the difference in animation, lift, and suspension, and training progression demonstrated by Dressage horses as compared to stock type horses, which sometimes don’t have much of any of those things.”

(I underlined that last part because many missed it the first time around.  I should also point out that not everyone in the stock horse world likes or appreciates this.  That’s part of why western dressage is a thing.)

As usual, the answer to the question didn’t really come from ANY of the people who resorted to name calling and other unpleasantries. People do seem to think they can change hearts and minds via social media nastiness.  I mean, seriously, if a complete stranger walked up to you in a restaurant just as you were about to dig into a fabulous pizza and said “Hey, stupid. That’s bad for you, you shouldn’t eat it.” Would you stop eating? Of course not. You’d cut two slices, order a root beer, and chow down. If a friend or family member said it, you’d slow down a little. And then cut them a slice, most likely, so you could be together in the afterlife.  But I digress. Back to the matter at hand.

As is typically the case, the answer, or at least the beginning of the answer, came from a horse. Specifically this horse.

Her name is Virginia. She’s a reining horse. And last night when I went to bring her in, she was a very IMPATIENT reining horse. So impatient that while I was getting feed around, she knocked out some +1 rollbacks. Better than any rollback she’s ever executed with me on her, by far. (Rollbacks are harder than they look. Let me just say). When I finally brought her in, the ground looked like this: 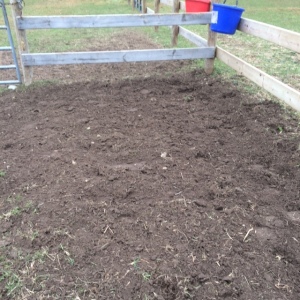 And suddenly “the ISSUE” became clear. My off-hand comment intended to illustrate a point (that we ask horses to do lots of things that aren’t terribly natural) was so inflammatory because sometimes horses naturally really DO the things we ask of them under saddle. Sometimes they piaffe, and sometimes they rollback. In that regard, I stand corrected. I am indeed uneducated in the intricacies of classical dressage. But that doesn’t mean I don’t appreciate them or try to understand them. And THAT is really the point of the original post and the entire sordid affair: we all need to try to understand where others, including western pleasure riders, are coming from, even if it’s painful to watch and (evidently) far more fun to blow up social media.  Otherwise, they’ll just keep eating that pizza.

Trust me, anyone in the stock horse world is WELL aware that there are issues, and were well aware prior to any recent Congress video. But there are issues in every discipline (rollkur, anyone?).  There are people in all disciplines who use bad training techniques, and they should be stopped.  Yes, sometimes western pleasure horses are ridden too young…but few ever think to ask why that is. It’s not because all western pleasure people are monsters…it’s because once upon a time there were breeders in the horse industry that made their living producing horses. And they weren’t independently wealthy. Many of them needed horses shown as soon as possible to have a fighting chance of surviving, so futurities were born. Should it continue, or should we have amazing purses for horses 4 years old and over? That’s something to suggest…and I’m sure people with higher pay scales than mine are considering it. Yes, some western pleasure horses are going too slow…but when they are bred to do it, they may lope and jog slowly, yet beautifully,  in the pasture, too.

We can’t get completely distracted by what goes on in social media if we really want to fix things. For example, I think dressage is amazing, and I am not going to give up my bucket list dream of participating in it because there are mean people who resort to name calling.  There is plenty of that everywhere.  I also didn’t believe it was fair for some people showing western pleasure horses to suggest that those who criticize it are “ignorant” (or worse).  I’d suggest you seriously ask yourself why people say those things about western pleasure horses…

Personally, I’m going to learn as much as I can, ask lots of questions, and make my own decisions about what is best for my horse. Just like I did when I showed a western pleasure horse.

3 Comments on “Adulting is a Pain”