Get Out of Your Box Stall 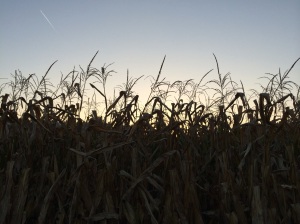 For some of you, this is not a big deal at all, and you’re probably wondering WHY it was a big deal to me. For others, you’re wondering why I even considered doing it. To be honest, I wondered that too, so I got to sorting out why something I did all the time as a kid, has suddenly become SUCH a big deal to me. At first I thought it was the fact that I managed to haul my “not so young” self onto the back of a horse who hadn’t been ridden in 2 months give or take, and who can buck like nobody’s business on the end of a lunge line. But it wasn’t really that so much. I knew that she had been ridden bareback by her previous owner, and I also knew that she doesn’t typically buck like that with a rider. I also wore a helmet. There was a bit of physical risk, but nope. That wasn’t it.

Once I started through the turn out lots toward the field, I could sense that she was also pretty excited about venturing out of the arena. Her head was up and her ears forward, and I did nothing to change it. (THAT was new). She was marching forward like she had business to take care of, and I did nothing to change that either. Once we got into the field, we started down the edge, where there are lots of trees and lots of deer, who evidently found us a bit nerve wracking. I felt Virginia (the mare) jump, but she didn’t spook much. I laughed and we kept going. (UNHEARD OF.) No one was watching, or evaluating our performance except deer…so what did it matter that she spooked? It didn’t.

You’re probably starting to understand what I eventually came to realize. For the past 30 plus years, I’ve been showing horses…typically western horses. With showing, comes competition and evaluation, which I also enjoy quite a bit. What I think I eventually forgot to enjoy though, was the horses themselves, and how amazing it is that we are athletic enough to ride them and they are kind enough to let us do all sorts of ridiculous things they wouldn’t do on their own. That is part of what makes judging so enjoyable…you get to watch people and horses do amazing things, from getting around the arena in one piece, to knocking out a flawless pattern.

This little “spin” through the cornfield reminded me of why I love horses in the first place. But there was a little more to it. I think that sometimes when we show horses (or compete in anything) seriously, and for a long time, the competition actually becomes the focus, rather than the experience of it. I know I went through a phase where I could scarcely imagine doing anything with a horse other than compete. (Probably not my finest hour, but it’s true. And kind of sad, frankly.) This experience also got me thinking about other things I’ve neglected to try for fear of not doing them well…things like cooking, for example. Yikes. Cupcake Wars would be the one of the scariest things I can imagine, to be honest. (And how did we get to the point where even cupcakes have to be a contest?!)

If you look at the header for this blog, you see the quote “If you change the way you look at things, the things you look at change.” When I started Out of the Boxstall, I wanted to share thoughts and ideas about the horse industry, judging, and horse shows, and I’ll definitely keep doing that. When your life revolves around those topics, it’s kind of hard not to. But I really wanted to encourage people (myself included) to do some “out of the box stall” thinking in other ways as well. One of my New Year’s Intentions (Not resolutions. Those are the kiss of death) is to write more regular blog posts…if you like them, great, but if you don’t, that’s fine too. That’s probably one of the most important things I learned from riding bareback in a cornfield…sometimes the experience of doing it is much more important than the ribbons, points, numbers of “Likes” or any other external reward. I really think 2015 is going to be a great year…and I hope it is for you, too.

What will you do this year that gets you “out of YOUR box stall?”

← Success Doesn’t Happen in a Straight Line
I Heart Winning →

2 Comments on “Get Out of Your Box Stall”